Shang-Chi and the Legend of the Ten Rings is the 25th film in the Marvel Cinematic Universe (MCU). The film is directed by Destin Daniel Cretton, from a screenplay he wrote with Dave Callaham and Andrew Lanham. The film stars Simu Liu as Shang-Chi alongside Awkwafina, Meng’er Zhang, Fala Chen, Florian Munteanu, Benedict Wong, Michelle Yeoh, Ben Kingsley, and Tony Leung. The film starts in the US and moves to the Far East as Shang-Chi is forced to confront his past when his father Wenwu (Leung), the leader of the Ten Rings organization, draws Shang-Chi and his sister Xialing (Zhang) into a search for a mythical village.

Ten Rings has been a presence in the MCU since the first Iron Man film. It was the Ten Rings organization that imprisoned Tony Stark and most noticeably in Iron Man 3 Trevory Slattery posed as the Mandarin head of the Ten rings. After that film was released, Marvel made the short film All Hail the King, where an agent of the Ten Rings breaks Trevory Slattery out of Prison. which leads directly to Shang-Chi. The lengthy payoff of the Ten Rings subplot makes sense when you realize Shang-Chi entered development in 2001, but work did not begin in earnest until December 2018.

Principal photography began in February 2020 shooting at Fox Studios Australia in Sydney and on location throughout the state of New South Wales. Bill Pope served as cinematographer for the film. Pope was chosen as DOP because Cretton felt Pope’s work on The Matrix (1999), had the right tone for an MCU film focused on Asian and Asian-American characters. To help VFX supervisor Chris Townsend, Joe Farrell joined the supervising team to be based initially in Sydney. As Farrell was originally from Australia, the move was a natural one. After all the years it took to get Shang-Chi into production, the film came up against COVID lockdowns. Production was forced to stop mid filming.  As some VFX work could be undertaken during the COVID shutdown when filming resumed, Chris Townsend was supervising early turnover shots in the USA, and Farrell continued in a parallel in Sydney and doing second unit location work remotely.

The bus fight sequence was part of Cretton’s pitch for the film, saying he enjoys, “fights where the stakes just keep rising as the fight continues”. Although the exterior shots of the sequence were filmed in San Francisco, the bus interior scenes were shot in Sydney. There were “168 shots inside the bus sequence, and I’d say about 40 or 50 of those are heavily digital. That is an entirely digital environment, with digital buildings, digital bus, etc,” explains Farrell. The sequence also required some digital people. “We had nine passengers in the bus that we had to plan out where they are exactly throughout the whole sequence because they moved from the front to the back and then back to the front of the bus.” This was made more difficult as the editing team edited the sequence initially according to how it was tightly and intricately mapped out with the Stuntviz. As the edit progressed and tightened, the editors made changes and “so sometimes we’d have to digitally move people around. We ended up having to map out and track where they all were, at all times.”

The film’s supervising stunt coordinator was Brad Allan, who had worked with Jackie Chan, and was extremely experienced in this style of seemingly improv stunt work. “This sequence is an homage to the way Jackie Chan would fight, and the way he would use the environment or his clothing or jacket, to fight,” states Farrell. “For example, the way Simu Liu might be moving his arm, – the camera would need to come around exactly on its mark and the stunt team were very astute in all their observations, making sure we never crossed the line and maintaining the framing”

In reality, nothing was improvised. “Brad and his team did an incredible job with the bus sequence – it was very intricate, very well thought out, and planned over and over again,” comments Farrell. The stunt team did approximately 10 to 15 different stuntviz edits on the bus, with a crew of six or seven actual stunt actors. To make the production’s final previz, the approved stuntviz was then handed over to VFX who added all the other previz around that work, filling in the environment as it was needed. “There were also quite a few pieces that the stunt team could not simulate and so we then worked with them, for example, in designing the end sequence where the bus finally comes to its resting place outside Ghirardelli square,” he adds.

Shang-Chi and the Legend of the Ten Rings is Chris Townsend’s Sixth Marvel film. “Chris said the bus sequence was by far one of the most complicated sequences he’d ever put together, and it’s seriously one of the most complicated sequences I’ve ever seen or done,” comments Farrell. “When you’re on that bus and we’re shooting for six weeks and there’s a crew of 300 people standing around, – you need to know exactly what you’re doing. It is not just complicated for the stunt people and the actors and the extras, but the rigging of the camera inside that incredibly confined area was really complicated.” At Fox studios, the team had what Farrell called ‘a tiny little technocrane’. This was a very small 6 ft long technocrane mounted on rails running the length of the bus. Around this, “the bus would get pulled apart and put back together on almost an hourly basis.” The team filmed 10 to 12, action setups a day, down to about six depending on the complexity of the shots. Everything was designed to be modular with the crew pulling windows out or pushing windows back into the bus on a per-shot basis. “The crew that was pulling the windows out of the bus and putting them back in, again, they were dealing with windows that weighted sometimes hundreds of pounds each.  They would come up to me and they’d be like, ‘okay, what are we doing on this setup?’  and I would say, ‘I need that one out, that one out. And that one put back in’ and they’d be like ‘oh okay‘…” he says laughingly recalling the hard work the crew did.

To give editorial the best material to work with all the bus stunts were shot at 48 frames per second, but with full shutter to counter the faster fps, this meant the shots could be tracked or adjusted as needed, but back at 24 fps the footage would have the right amount of motion blur in each frame. Most of the bus was shot at full aperture on the Alexa LF, to allow for reframing in post, and additional tracking data. For the shots destined for slow-motion, the team shot using the Phantom Camera at approximately 250 fps. 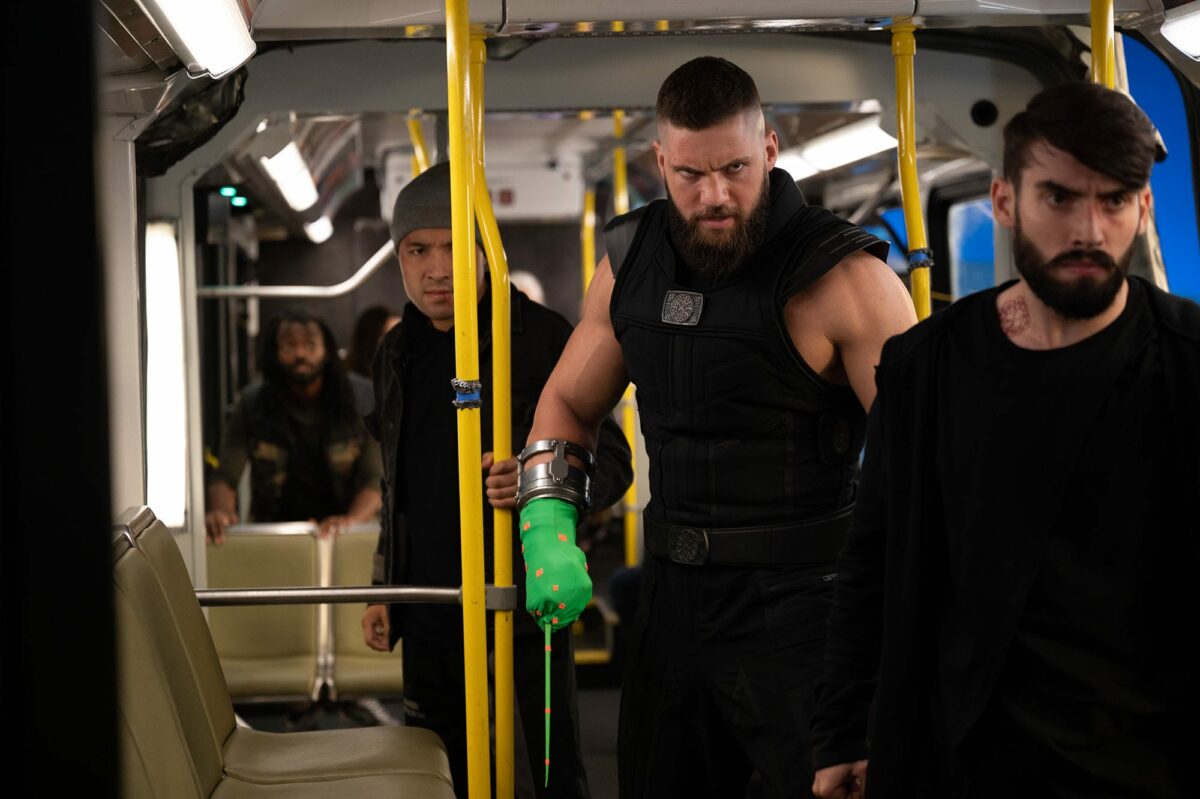 Farrell was initially going to the San Francisco shoot to supervise it, but due to the pandemic, he had to stay in Sydney. Farrell planned out all the elements remotely with extensive documents, “Google Street View was my friend!” he jokes. “I basically planned out all the streets that were traveling along. And when we shot there, we got really lucky because the pandemic had basically shut down filming all around the world. Nothing was happening in North America so with our shooting approved, we basically got to hire this amazing dream crew most of whom normally film The Fast and the Furious films.

If the bus fight was complex on a horizontal plane, the Macau fight was a vertical challenge as the fight takes place over seven floors in and outside a building. Macau had the added complexity of the fight happening in front of a glass building, that was highly reflective. “We had all the reflections of all the stunt people and all the actors on that building,” Farrell recalls. “But of course, if you ever tried to hide a film crew in a completely reflective set, you end up seeing the entire film crew at one time or another.” For this sequence, the production built one of the most extensive blue screens for the film. “We basically almost did 360 degrees around the set with blue screen, but even so, we still needed big banks of lights. With the lights and all the holes and safety lines and the stunt rigging that needed to be removed and most of the crew also in that reflection, my hat goes off to the team of RodeoVFX for doing such brilliant and extensive Roto work to make this sequence work,” says Farrell.

To make the sequence work the team ended up creating a large section of downtown Macau, completely digitally. The team designed and built a very particular intersection of the old section of Macau, which was only slightly altered to allow the sequence to play out. Due to COVID, Farrell had to remotely supervise the shoot in Macau. “I remember waking up at five in the morning and being on a call with the guys standing on the bridge, trying to help remote line up the shot from Sydney.” To previz the shots, Farrell took the assets the production had of Macau and importing them into Unity, where he could then experiment with different framings and blocking of camera movements and discuss them with the DOP and the Director. This was then sent to the Drone crew in Macau who would map the movements accurately on Google Earth. “Then they would know where it was, where it started, the drone height etc., which was all needed in order to get the correct permits, because when you’re flying a drone that close to public buildings and government buildings, everyone needs to know exactly what is going to be happening,” Farrell explains.

The Macau fight happened on three different sets, in the two main Fox stages. One of these massive sets had the ability to tilt back 45 degrees, as the whole unit was on a gimbal. This was required for “one particular shot in the sequence where Shang Chi’s sister and two others travel up a floor and then as they go out, as the camera comes around them,” Farrell explains. “It is a really complicated camera move for the Steadicam operator to do in sync with the action. We had teams that had to run up the glass, holding on to bamboo, in order to get the shot, it was both difficult and exhausting.” The Steadicam operator could only do seven takes before he was exhausted. In a number of these shots, the camera is being passed from operator to operator to continue the shot and follow the action. In the case of the shot where Shang-Chi spins through the scaffolding all the way down until he eventually leaps backwards and catches Katie as she falls, the action was done with two operators in one take. They were handing the camera from the main operator to another in a flying harness. “The stuntman, who was Australia’s parkour champion, had to fall through the rig about 60 feet without any wires, doing the stunts, spins, and falls, all while avoiding other rigging safety lines for Katie,” points out Farrell.

At the start of this sequence, Awkwafina was actually swung on a pole high up in the studio. Not only did Rodeo VFX remove the safety lines, but they then seamlessly transitioned into a digital Katie as she fell. The fall was the last shot in Macau to be finalized and “I took a lap around the theater once we got that one because it was brutal,” says Farrell. “I think it’s about 250 frames long and yeah, definitely a career highlight.”

In the end, Farrell worked with five vendors over the sequences he supervised, and Chris Townsend, covered 11 vendors, sometimes with three vendors on the one-shot, “it was literally like moving chess pieces around. We must’ve completed over 2000 shots of which I think there is over 1700 in the final film.