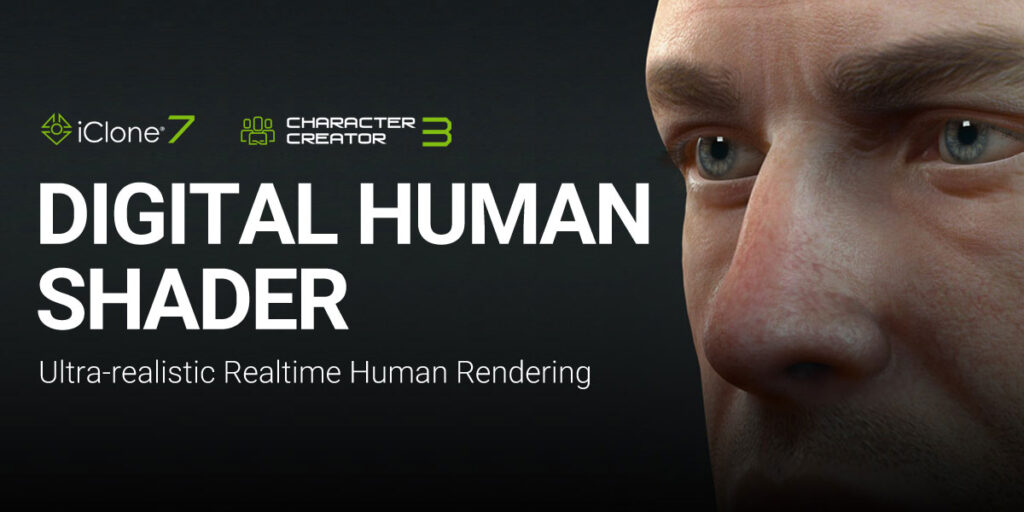 Character Creator features new tools that build on the previously released Digital Human Shader and the Headshot plugins. It is designed to build both faces and bodies for use with Reallusion’s own iClone software, as well as  Autodesk Maya, Blender, Unreal Engine 4, Unity and many other 3D tools. This new release aims to connect various key pipeline pieces into one system for 3D character generation, animation, rendering, and interactive real-time use.

The second major aspect of the new release is SkinGen. The basic SkinGen version is included as a free update in the CC3.3 release. It is provided with some embedded sample skins and makeup assets. The new character base, CC3 Base+, is required to take advantage of all of the new skin properties and quality in SkinGen. There is also a Premium SkinGen, (see below) with even more options and samples.

The new version 3.3, Character Base (CC3 Base+), provides the digital human base. The new CC3 Base+ provides an enhanced character topology. The program offers an import upgrade path for any existing CC3 characters a team may already have. This is important as the CC3 Base + has a vastly different and enlarged UV space to aid in greater detail. It offers evenly-distributed quad surface and quality edge-loops for smooth facial expressions. The new characters have really nice and consistent typologies and the tool covers all of the parts of the body from fingers and hands to toes and feet. Also, the UVs can be exported, fully optimized, for work in Substance Painter or Mari, etc.

The SkinGen Editor lets artists stack skin and makeup materials, control the blend options between layers, and change material attributes for color, transformation, and distribution. The new SkinGen aids in easier skin details, makeup effects, and tattoos for the digital characters. The SkinGen Premium tools unlock the ability to extend the 15 layer editing limit, provide more control over Skin & Makeup detail with custom SkinGen effects, and a UV Converter that is also able to directly bring in DAZ textures for Character Creator 3 characters.

The system is designed to move across different digital characters in terms of their age, gender or ethnicity. In addition to the main SkinGen Premium, there is a series of Ultimate Digital Human Add-ons that have also been released. All of these add-ons along with the premium SkinGen are currently being bundled. This extended set of Morphs and makeup effects also currently includes 12 figures in a bonus Human Anatomy Set (valid until the end of Aug 2020).

For example, the Makeup and SFX package as part of the Ultimate Bundle is a complete layer-based editing environment to build custom makeup looks and SFX. It comes with 280 makeup varieties from the everyday casual looks to glamorous styles, and on to creative looks such as reptile scales, cyberpunk, tattoos, or battle-scarred fighter looks.

Reallusion partnered with Texturing XYZ and Adobe’s Substance for this release. SkinGen is embedded with MicroSkin textures licensed from Texturing XYZ and the SkinGen dynamic material is driven by Adobe’s Substance Technology. “SkinGen is a major breakthrough in the digital human workflow, “ comments John Martin, VP, Product Marketing, Reallusion. “The tools inside SkinGen are also empowered by the combination of industry leading partners like Texturing XYZ and Substance. SkinGen makes it possible for anyone to create a character with custom looks for age or appearance, and ultra-fine details down to the pores”.

Another popular part of the Reallusion Character Creator toolset is the Headshot tool. This AI-powered Character Creator plugin generates 3D realtime digital humans from a single image or photo. While it is not a part of the new bundle, a new v1.1 has recently been released. The Headshot tool with its intelligent texture blending and head mesh creation has been used to build digital doubles that are rigged for voice lipsync, facial expression, as well as full-body animation. The Headshot tool contains two AI modes: Pro Mode & Auto Mode. Pro Mode is high resolution and has more Headshot (1000+) sculpting morphs, as well as Image Mapping and Texture Reprojection tools. The Pro Mode is designed for production-level hi-res processing at 4096×4096 texture resolution and face shape refinement. The Auto Mode makes lower-resolution virtual heads with 3D hair, in an automatic process. Unlike some digital human bespoke programs, Reallusion tools, such as Headshot and CC3, have been trained on data that includes a wide range of ages including babies. Many other character creator tools on the market or shown in research papers, are exclusively aimed at adult humans.

One of the strong advantages Reallusion offers is specialist digital human software that is both easy to use and affordable to most artists. The main Ultimate Digital Human Creation Bundle is US$399 currently, and with Headshot, it is currently US$499.  CC3 plus Headshot is US$299. These are perpetual licenses and not annual subscriptions.